Who is Daniel Wellington? Is he even a real person? We all know it’s the name of one of the biggest watch brands among young people. With 3.9 million followers and counting on Instagram, some posts even featuring Kendall Jenner, the minimalist watches inspired by classic design of Daniel Wellington are hard to miss on social media.

While the name Daniel Wellington is immediately recognizable as a British name, the company is Swedish and founded by countryman Filip Tysander. So where did the name come from?

According to the company founder Daniel Wellington is a chance acquaintance he made on a trip.

On this trip, our founder Filip Tysander met an intriguing British gentleman with impeccable yet unpretentious style. The man had a particular fondness for wearing his vintage watches on old, weathered NATO straps. His name? Daniel Wellington.

The company generated $250 million in sales despite being founded as recently as 2011.

I started a little webshop and designed the logotype myself in Photoshop. Then I sent designs back and forth to a factory in China manufacturing the Nato watch bands.

For all we know, Daniel Wellington may not even exist. So far nobody’s turned up to claim the name. In an interview, Filip is noted as saying:

A part of me wishes to contact Daniel Wellington and explain what’s happened, but at the same time I want to letting the sleeping bear lie. If the source of my inspiration should turn up at the office one day I guess I should have to hide underneath my desk.

The watches are priced in the $129-199 range which isn’t pricey nor cheap. It’s probably just right for a young professional who wants to sport a fashionable brand without breaking the bank. They are mostly known for bringing back tricolor fabric straps known as NATO straps. The brilliance of the watch is in the branding, classic design with a British flair to the brand name while costs are kept low by sourcing from China. 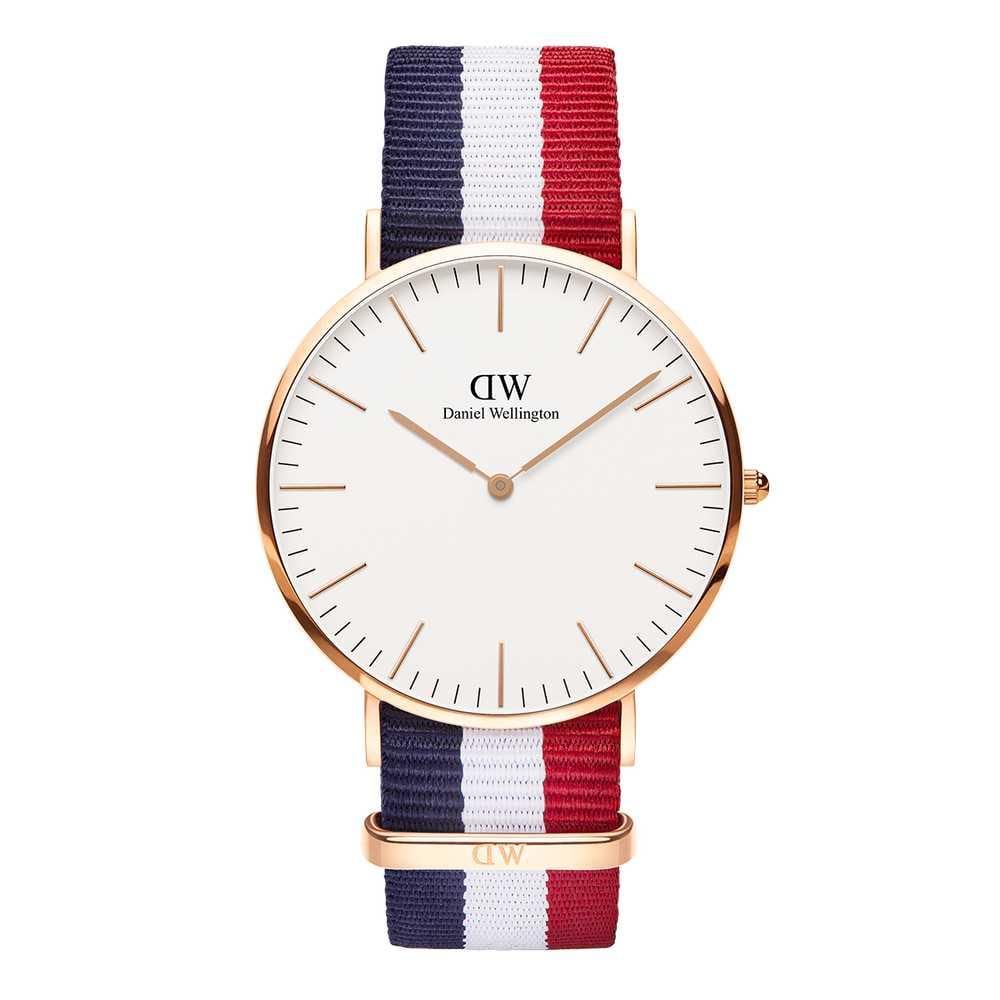 Watches Designed in Sweden, Made in China with a British Name

With watches named Cornwall, Bristol, York, Sheffield, Durham, Canterbury, or Cambridge, you’d be forgiven for thinking that Daniel Wellington must be a quintessentially British gentleman who takes great pride in his heritage.

He was so inspired by the style of vintage watches attached to a NATO strap that Filip Tysander was not only inspired to create his own brand of watches in the same style but name the brand after his random acquaintance. Fortunately or unfortunately the British namesake has yet to appear in media despite inadvertently becoming a household name.

While the watches do sport a classic look, they are designed in Sweden (the CEO’s home country) but made in China using Japanese quartz technology. Apparently they are also growing as a brand in China (the country of manufacture).

The watches boast a healthy profit margin making Filip Tysander one of the richest bachelors in Sweden with arguably the priciest apartment.

It just goes to show how brands can be created out of thin air with a great design and savvy social media marketing.

This article is an interesting breakdown of the Daniel Wellington watch by a watch geek. The title might come off as negative but the analysis is fair and quite informative if you’re not a watch geek.