What Happened to Sunny Co Clothing’s Infamous Red Swimsuit that Went Too Viral?

What Happened to Sunny Co Clothing’s Infamous Red Swimsuit that Went Too Viral?

Unless you spent the summer of 2017 living in a cave you probably saw this red swimsuit on your social feed. What was supposed to be just a small promotion for a young apparel company run by two frat brothers went viral. It was a simple offer, everyone who reposts and tags the post would get a “FREE” Pamela Sunny suit (no doubt inspired by Pamela Anderson of Baywatch fame). The picture itself was liked over 340,000 times! At the time Sunny Co Clothing only had 7.35K followers on Instagram which quickly shot up to 775.95K practically overnight. According to a video on their Facebook page the post was shared 1.6 million times

They were covered by major media outlets with a mix of outrage and sarcastic humor. It spawned countless memes which only increased the notoriety of the swimsuit.

Soon people were wondering “Can they deliver?” 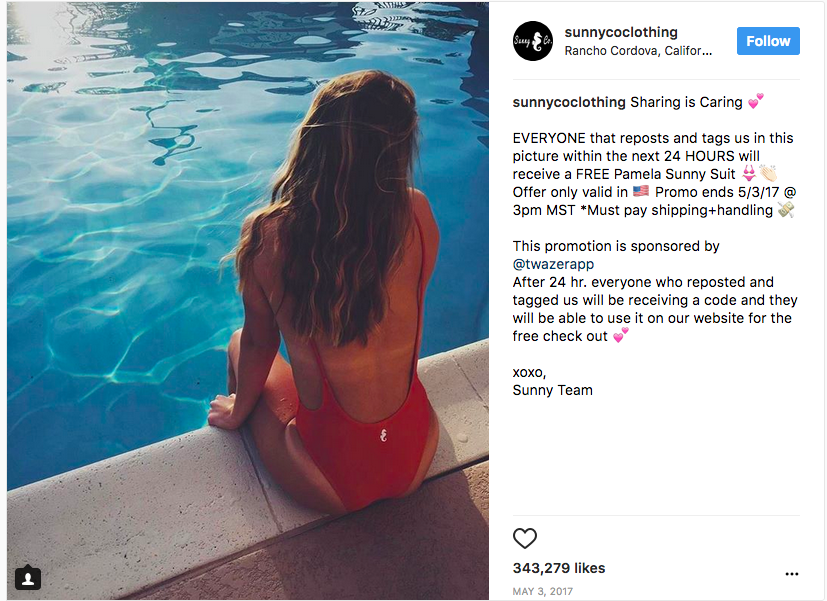 These organic viral posts are every marketers dream but can also catch the unprepared off guard. Some companies even fold under sudden demand. The question on everyone’s mind was “how are they going to deliver?”

Many customers were charged full price after failing to enter the discount promo code. According to a press release they ended up refunding nearly $73,000. They also scaled the deal back in another Instagram post to the first 50,000 customers.

Here’s where it gets interesting. While the swimsuit they could get for “free” was listed at $80 they charged $12 for shipping according to some sources. Currently the swimsuit sells for $64.99 and US domestic shipping is free for orders over $60 ($8.98 otherwise) as of January 10, 2018.

The two entrepreneurs managed to deliver on their promise despite the rocky start. According to their about page updated on December 29, 2017, they have managed to fulfill 57,000 orders since then. Considering their swimsuits are in the $64.99-$99.99 range that could represent $3,704,430-$5,699,430 in gross sales alone. Of course that’s only if you don’t subtract they 50,000 customers who only paid shipping. They would still collect $600,000 in shipping charges alone which probably represents a nice return considering all the publicity they got. So that would put the gross sales in the range of $454,930-$699,930 plus the $600,000 they collected in shipping.

They are no doubt quite successful, especially for a first year startup. They even managed to donate $50,000 to the Alzheimer’s Foundation in October.

Their Instagram following declined to 430K and is steadily dropping according to SocialBlade.

While sudden and unexpected success is always a nice thing and they are no doubt still riding the wave of the accidentally viral promotion they are having trouble hanging onto the followers on Instagram. Although this is somewhat unavoidable due to the random nature of the viral exposure, it’s still a potentially worrying trend.

Also since the majority of their lineup currently consists of swimsuits in a very limited selection at a somewhat high price point it remains to be seen how they will be able to successfully distinguish themselves like some of the bigger players in a very competitive market. And of course that doesn’t even touch on the lean months of autumn and winter for seasonal products like swimsuits.

Still you have to give these entrepreneurs credit for somehow managing to ride out a sudden storm and still manage to succeed. It’ll be interesting to see how they grow in 2018!